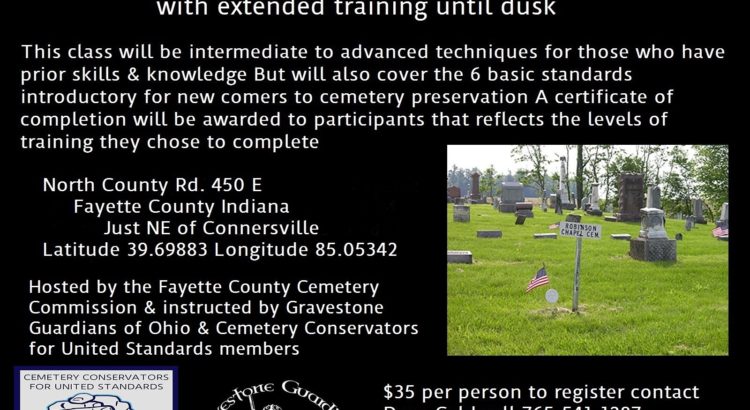 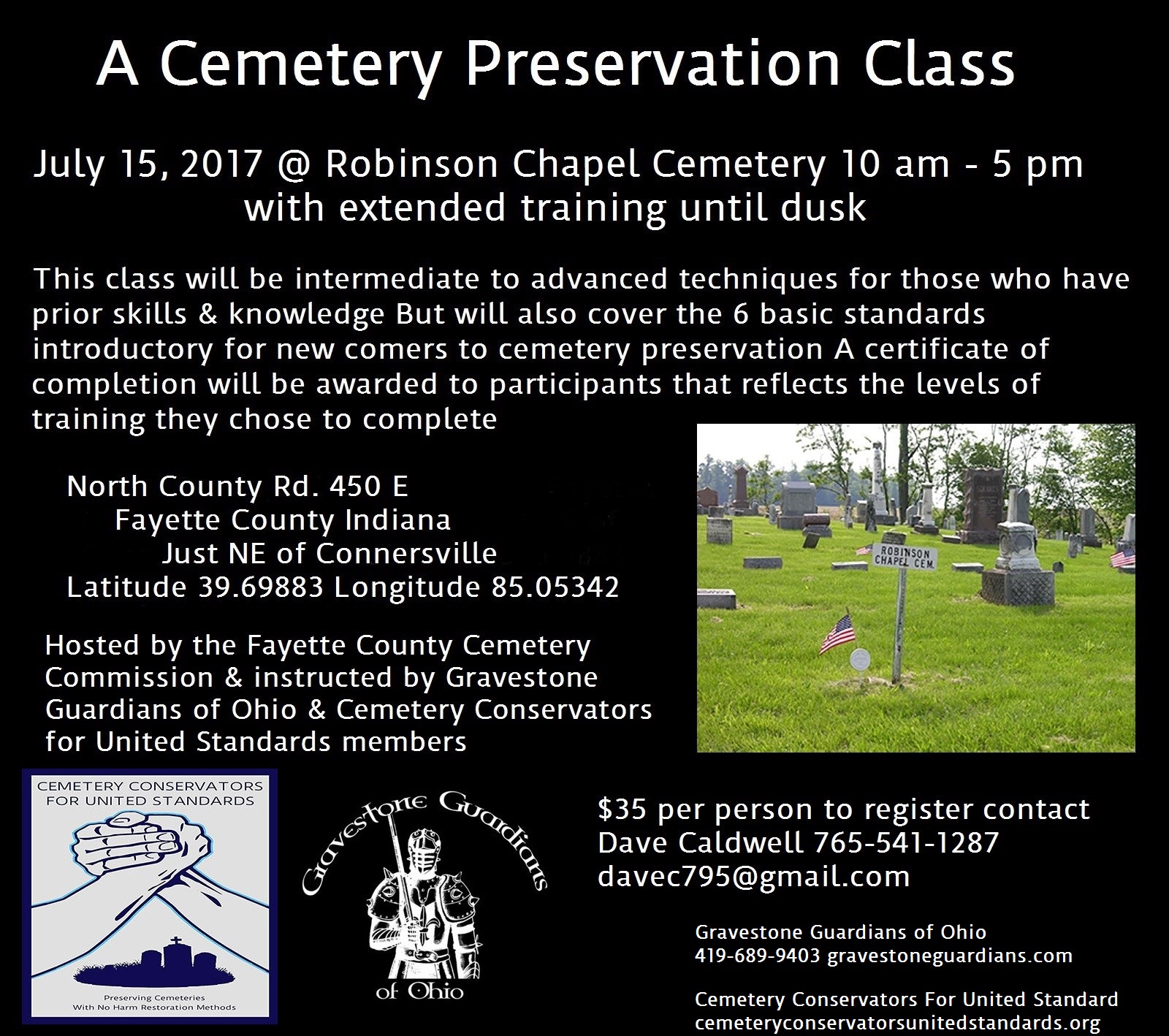 A fond look back 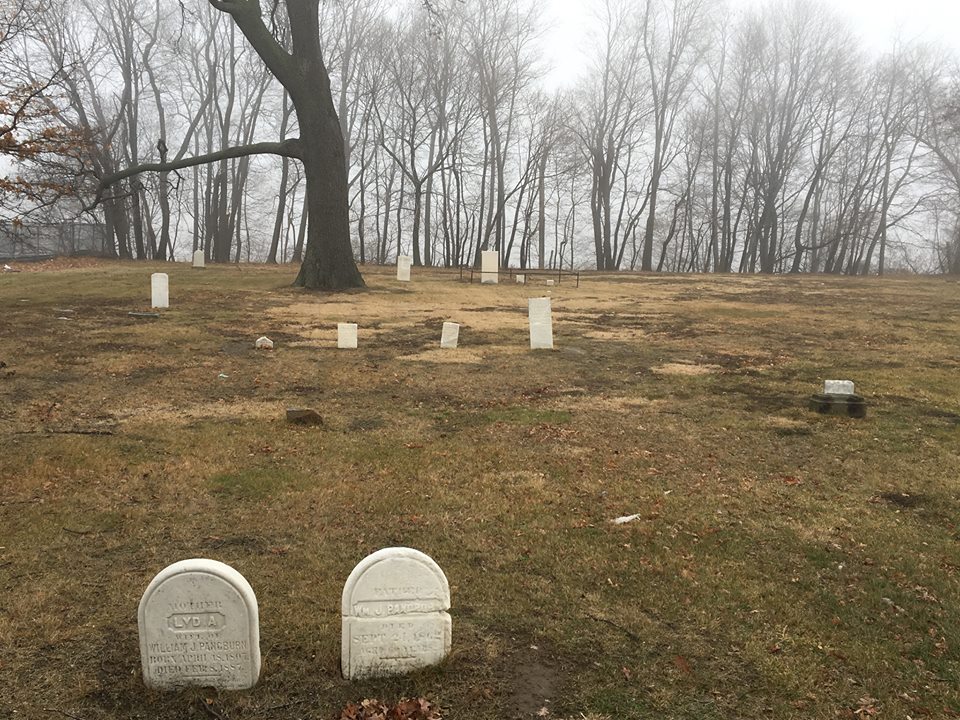 This cemetery is located on the northeast corner of Lake Avenue and Maplewood Drive. That is north of Route 104 (W. Ridge Rd.). It was at the furthest navigable location up the Genesee River before the Lower Falls. It was a very early settlement but sparely settled area that was first used by the King family about 1797 then by the Hanford family beginning about 1809. The cemetery is maintained by Eastman Kodak. 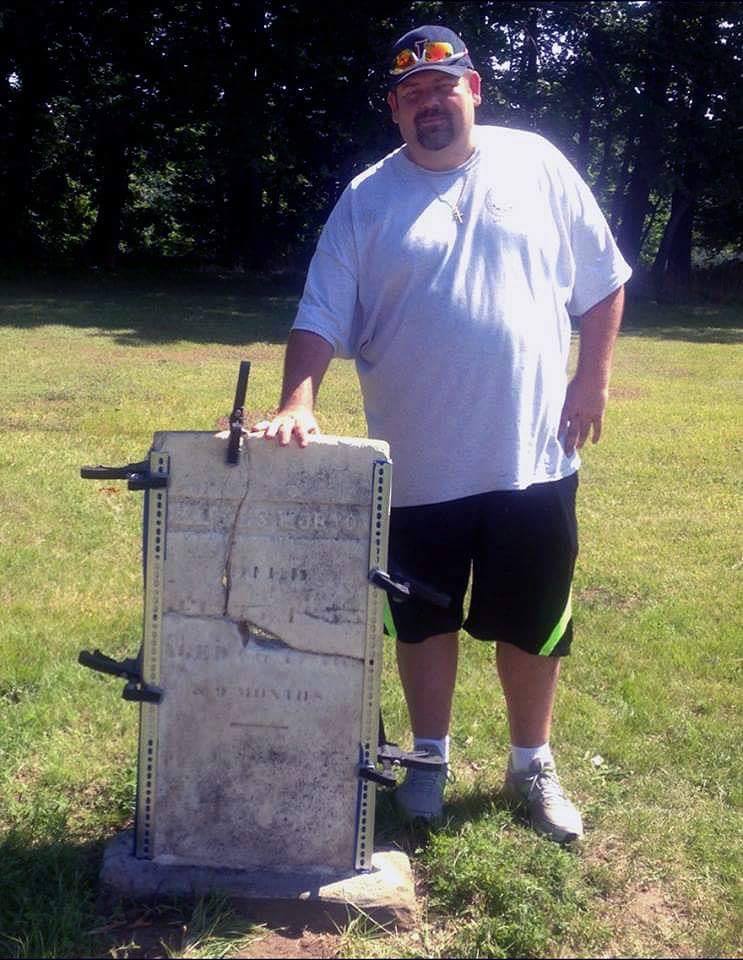 Because of my childhood memories and love of forgotten and abandoned cemeteries, I wanted to learn preservation and protect these special places that most have no idea that exist anymore.

I started out photo-documenting cemeteries at first, but started getting dejected at their condition and I wanted to do something to make a difference in protecting their history. 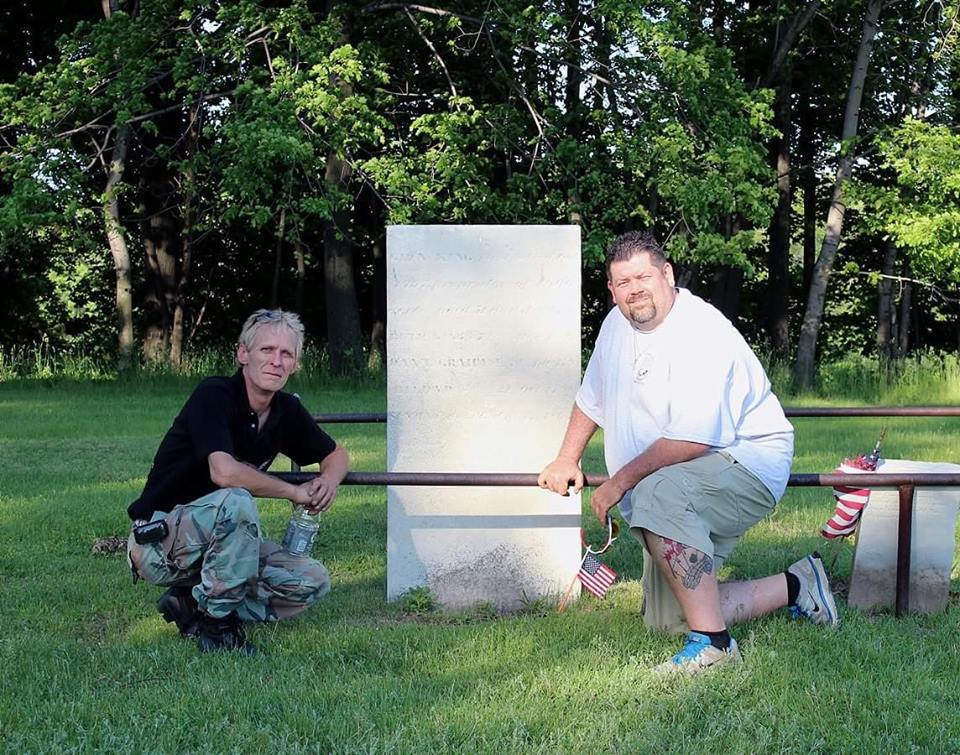 The year prior, I met and became friends with Mark Morton of Gravestone Guardians of Ohio via Facebook, who was doing cemetery preservation work and we talked about doing a personal tutoring at King’s Landing that I paid for myself.

Somehow along the way, I met a very ambitious young lady Bridget Harrington from Connecticut who wanted to learn how to preserve cemeteries herself and drove all the way here with her brother and all four of us got to work. 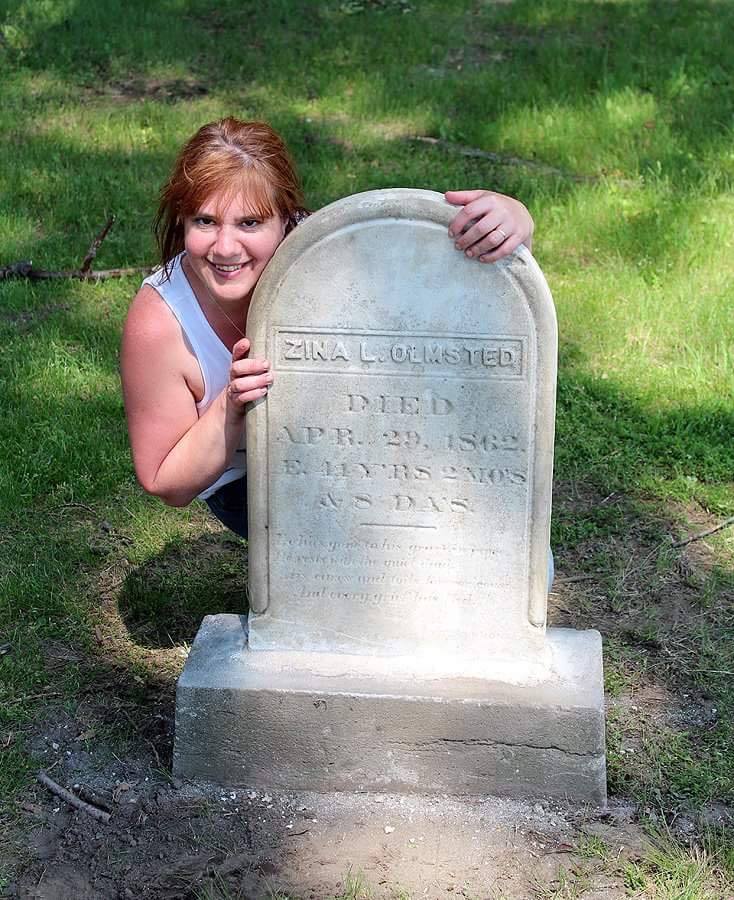 This was Bridget’s project and did a spectacular job cleaning the stone with just Orvus soap and D/2 Biological Solution. 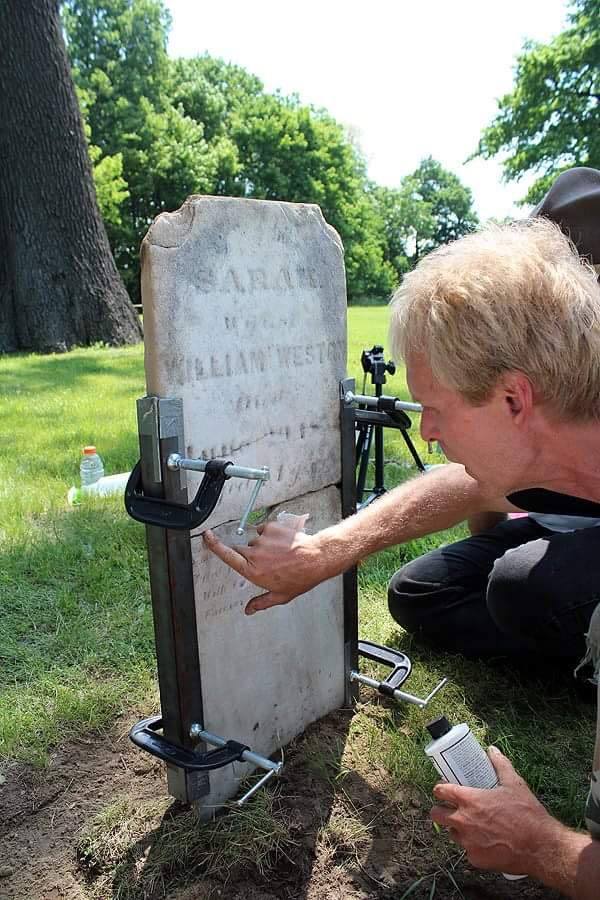 This is Mark showing us the epoxy process as well as infilling any open areas.

This is Gideon King’s marker looking incredible after four years!! No nyaloxing here!! Not even a soft bristled brush…..just one application of D/2 that summer of the workshop.

Some History of the Kings Landing Cemetery

King’s Landing Cemetery was named for Gideon King who came to the wilderness at the lower falls of the Genesee River in 1796, with Colonel Zadock Granger. Both men were soldiers of the Revolutionary War, from Suffield, Connecticut. They purchased of Mr. Phelps, agent for the Phelps and Gorham estate, 3000 acres of land situated on the west side of the river near the lower falls, and then returned to Connecticut.

The next year, 1797, Gideon King returned to the lower falls, accompanied by his brother-in-law, Daniel Graham, Elijah Kent (another Revolutionary soldier), Eli Granger, son of Zadock Granger, and his own two sons, Thomas and Simon King.

The following year, 1798, that dread disease, Genesee Fever, was the cause of the death of Gideon King, and his two sons, Daniel Graham King, and Bildad, also of Daniel Graham, his brother-in-law. These deaths caused the establishment of King’s Landing Cemetery.

The cemetery was just below the house built by Gideon King in 1797, on what is now Lake Avenue. In this neglected little spot are the graves of Revolutionary soldiers, and some of the earliest pioneers of the “wilderness” which is now a part of the city of Rochester. Some of these graves are without headstones, and those still standing, are mostly made of river stones.

In l799, Colonel Zadock Granger, who had followed his son to the Genesee Falls, also died of Genesee Fever, and although buried in King’s Landing Cemetery, his grave is now unmarked.

In 1910 – 1911 Mrs. Anah B. Yates of Rochester, wrote a series of articles which were published in the Post-Express on genealogy and made a list of stones standing at that time. This list shows that 1798 was the first date of interment in King’s Landing Cemetery, and 1887 the last.

Jeremiah Olmsted, in 1790, settled first on his brother-in-law’s farm in Scottsville. Ten out of the family, and the help employed on the farm, died of Genesee Fever in the first year. In 1797, Jeremiah removed to the abandoned log cabin of Elisha Farwell, situated then on what is now Lake Avenue, opposite Lorimer Street. In 1798 he purchased a farm on the Ridge Road, and was made collector of taxes for Northampton, now the town of Greece. In 1816, he removed to King’s Landing, and the following, buried in King’s Landing cemetery, and are some of his descendants: Zina L. Olmsted, Huldah Olmsted Sexton, and the Pangborns.

In 1809, the seven Hanford Brothers came to the Landing from Rome, NY, and the name was then changed to Hanford’s Landing from King’s Landing. In January 1810, Frederick Hanford opened a store at the Landing, and his wife Elvira Sexton, was buried in the Hanford Landing Cemetery, at the age of 28 years.

In 1800 when the English traveler Maude, came to the wilderness to see the famed Genesee Falls. He first stopped at the house of Colonel Josiah Fish, but went on to Gideon King’s house at the Landing, as it was the only place, he said, where he could find any decent accommodation, or even a stable for his horse. He writes of a nice breakfast he had there of wild pigeons. As Gideon King died in 1798, it is probably one of the sons of Gideon King, who was occupying his father’s house he refers to, when he speaks so highly of Mr. King and his home.

Mr. Maude writes of finding twelve families in the township, four of them living at the Landing. He writes of Eli Granger, son of Colonel Zadock Granger, and says: “His nephew, Mr. Greaves, became also a settler, but lived only long enough to erect the frame of a good house, before dying.” Probably another victim of the fever whose grave is unmarked. He also says: “The Landing is at present an unhealthy residence, but when the woods get more opened it will no doubt become as healthy as any other part of the Genesee.”

At the death of Mrs. Ruth Graham King, wife of Gideon, in 1830, the headstone was put on the grave of Gideon King, and on it was the following inscription:

“The Genesee Fever was mortal to most heads of families in 1798, and prevented further settlements till about 1815.”

One historian says, that about twenty graves were made about this time 1798, at King’s Landing, for people who had succumbed to the Genesee Fever. This is borne out by the History of Phelps and Gorham Purchase which says that Bradford and Moses King, Dr. stone, and four brothers, Ebenezer, Daniel, Abel, and Asa Rowe came to King’s Landing in 1798, and says further: “These new settlers began to make farms, but encountered sickness and death enough to discourage the less resolute. Several heads of families died in the first few years. Asa Rowe died soon after coming in, as did Daniel Graham, and the father of the brothers King, and Elijah Kent… The other brothers (Rowe) left the country as soon as they had recovered, and returned to Oneida County. In a few years however, Daniel and Abel returned, bringing with them another brother, Frederick, and settled on the Ridge Road.”

As the list made by Mrs. Yates does not mention the names of Graham, Rowe, Kent, or stone, they are undoubtedly in some of the unmarked graves on the cemetery.

Another very important, but unmarked grave, is that of Colonel Josiah Fish, a Revolutionary soldier, who first came to what is now Rochester in 1793 and although he was also attacked by Genesee Fever, recovered, and liked the “wilderness” so well that he returned with his family in 1795, buying a farm of Captain Williamson, the agent for the Pulteney estate. The farm was situated on Black Creek. Captain Wiiliamson, later, engaged him to take charge of the Allan Mill (Indian Allan’s), and it was there in 1800, that his son John was born, and who has since been proved to be the first white child born in Rochester, although there are many claimants for that honor. (See Vol. VI, Publication Fund Series, of the Rochester Historical Society.) Libbeus, elder brother of John, is authority for the statement that his father, Colonel Josiah Fish, died in the year 1811, and was buried in King’s Landing Cemetery.